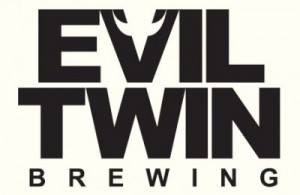 The U.S. is currently being invaded by Evil Twins. No, it’s not the next sci-fi series to be canceled on FX, but beers from the high-end Evil Twin Brewery out of Copenhagen, Denmark. The Danish suds made their American debut in New York City on April 18th, 2011 and release parties have been spotted at beer bars across our thirsty land ever since. Recently I was fortunate enough to attend one of these fests and lay lips to four of these delicious ales first hand.

Yin: An Imperial Stout weighing in at 10% ABV. Ominously dark but clean with plenty of roasted malt notes. The alcohol could be felt throughout, especially on the finish. Grade: B

Yang: An Imperial IPA sitting at 10% ABV. Plenty of floral and citrus hops are nicely off-set by an abundantly sweet malt backbone. The hops and malts mask the alcohol and it’s very drinkable overall. Grade: B+

Taiji: A 50/50 blend of the Yin and Yang — the way these beers were designed to be served. The whole is greater than the sum of the parts: Yin’s dark malts and Yang’s bountiful hops harmoniously converge for a Zen like balance. This Imperial Black IPA is potent and fantastic. Grade: A-

Before, During, and After Christmas Ale: At only 8% ABV, this Double IPA was the least boozy of the bunch. Unapologetically bitter with flavorful waves of grapefruit and pine hops, this one is strictly for the hop-heads. One of the better examples of a DIPA and the best of the tasting. Grade: A

These beers were all quality craft brews with the Taiji and Before, During, and After Christmas Ale winning the highest honors. What’s amazing is that these styles (Imperial/Double IPA, Imperial Stout) are generally dominated by American breweries. In fact, many beer geeks would snicker at the very thought of a Scandinavian Imperial IPA but certainly won’t after these first sips. So kudos to Evil Twin Brewery and rock star brew master Jeppe Jarnit-Bjergs.

About the Brewery: Evil Twin Brewing is the brainchild of Jeppe Jarnit-Bjergsø. An avid beer geek since 1997, Jeppe began home-brewing in Copenhagen, Denmark in June ’03. His first foray into the commercial craft beer scene commenced in September ’05, when he opened the now world-famous bottle shop Ølbutikken in Copenhagen. The reputation of Jeppe & his shop grew quickly, and myriad side projects began (including his collaboration with Cantillon on the Blåbær Lambik – one of this most highly regarded, highly sought-after lambics in the world). Evil Twin Brewing is Jeppe’s latest venture, and is the culmination of the vast knowledge, experiences, and relationships he’s built over the years.

The Evil Twins: Jeppe Jarnit-Bjergsø is in fact a twin, but probably not evil. His twin brother Mikkel Borg Bjergsø, is the head brewer for Mikkeller.