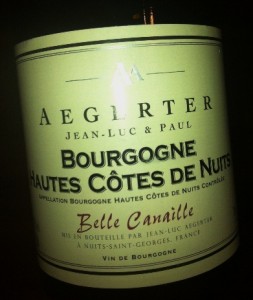 With Bastille Day done and over for the year, my thoughts turn to my favorite French wine region… Burgundy. The birthplace and Mecca of Chardonnay and Pinot Noir which evokes reverence in the hearts of wine drinkers worldwide. Countless paragraphs have described these hallowed wines with words like ethereal, existentialist and exquisite. Have I drunk the Pinot Noir-flavored Kool-Aid as well? Or do they really deserve these accolades? The easy answer is yes, they really are that good. But are these glorious, adjective-generating wines accessible to the average wine consumer? Not always, unless you’re sporting a black American Express card. If a combination of common and financial sense prevents you from acquiring the bottles that arouse this dreamy enthusiasm, don’t fret. The delicious, delectable and distinctive flavors of Burgundy are still attainable.

First, a primer on French Burgundy wines and their 700+ appellations (they went a little wild with these). (What’s an appellation?)

All whites from Burgundy (or “Bourgogne” [BOR gun NYA] which you’ll see on labels) are made from the Chardonnay grape and all reds are Pinot Noir. Four classifications reveal the level of government-deemed quality (from highest to lowest) on the label: Appellation d’Origine Contrôlée (AOC); Vins Delimités de Qualité Superieure (VDQS); Vins de Pays; and Vins de Table. In an effort to maintain consistency and quality reputation, within each growing region laws delineate grape varieties, watering restrictions and growing techniques, as well as labeling. Generally, you won’t see the grape name listed. But a few years back, after wineries whined that this constraint strangled their international competitiveness, the French government decided the Vin de Pays level could show the grape name, instead of just the region. Finally, we were able to pronounce something on the label. This distinction, however, is fairly rare, except maybe on Fat Bastard Chardonnay (did you know that’s French?)

Why, you might ask, are there so many mind-boggling appellations in Burgundy? These crazy-proud Frenchman love to talk about “terroir,” an un-translatable word which encompasses all the natural factors involved in grape-growing — sun, rain, altitude and soil characteristics. Within the confines of Burgundy, there are 400 different soil types, each creating unique flavor profiles in the grape. Thus, in order to define a Burgundian wine, they separated out locations that display an individual flavor profile. A confusing system was born, but it’s pretty easy to master the ABCs of AOCs.

Wine collectors ooh and ahh over the Grand Cru AOC Burgundies, hailing from famed regions like Domaine de la Romanee Conti (“DRC” to those in the know), Gevrey Chambertin (among other Chambertins), and Puligny Montrachet. These, to say the least, are tantalizingly toe-curling wines. Premier Cru (a step down the AOC ladder) are easily as high quality but, frankly, often taste better than some Grand Crus. But for the regular folk, like myself, who don’t have $100-$5,000 to plunk down on a bottle, a $20- $35 “regional” or “village” appellation will do just fine, thank you very much.

These are “simple” wines, according to the French. But not to me! The 2010 vintage in Burgundy is “simply super” in my book. In Pinots, tart cherry, dusty earth and high acidity are characteristic of the 2010s I’ve tried, and the Chards show off their peach, stony minerality and food-friendly, crisp finish.

A village Burgundy wine is literally named after the village closest to where the grapes are grown and is a blend of grapes from supposedly lesser vineyard sites within those village boundaries. It won’t have a Grand Cru label, but it will still represent – just without the Grand Cru price. Look for village names like Pommard, Beaune, Meursault and Givry (even single vineyards are sometimes listed for the fruit).

At the sub-appellation levels, the individual producers are almost irrelevant since most bottles you’ll find will be blends of grapes sourced from numerous vineyards. And on a great year like 2010, many of the smaller, less famous growers will still be contributing beautiful fruit to these wines. Take advantage of this and explore Burgundy because 2010 is tasting great. Sample a few of the regions mentioned above and you shouldn’t be disappointed.

White wines from the Rhone: Looking for love in all the right places

The best red, white and rose wines I’ve tasted in the past six months