During the dog days of summer people crave cold, thirst-quenching beer. Those special-release summer brews lining the shelves are tempting choices no doubt, but unfortunately the vast majority are watery and unremarkable. Belgian Wits and Hefeweizens are two tastier options, the latter being a little under-appreciated, especially in America.

The appealing Hefeweizen (pronounced “HEF-eh-VIE-sin”) is a refreshing, complex, and lightly hopped wheat beer full of personality. Born in Bavaria, it has been around for at least the last four or five centuries. The name is certainly appropriate: “Hefe” is German for yeast, and “Weizen” means wheat.

Both the wheat and the yeast strain contribute significantly to the Hefeweizen’s character and flavor profile. The wheat provides not only some grainy complexity on the palate — usually felt near the end of the sip — but also aids in promoting a billowy foam head. The yeast, however, is the real star of the show, responsible for the trademark “Banana“ and “Clove” notes and a slight sourness. These straw-colored beers are also unfiltered, meaning they contain suspended yeast resulting in a “cloudy” appearance and a fuller-than-expected body.

Germans breweries are lauded for these top-notch wheat ales but American brew masters have been attempting this style for some time now. We decided to put these suds to the test and see if the New World can compete with the Old. Seven Bavarians and five Americans threw their bottle caps in the ring hoping to be crowned “El Hefe”. This was a blind test, therefore reviewers had no idea which beer they were evaluating. Each mystery brew was judged solely on its own merit with the style guidelines taken into consideration. The only criteria were that the candidates all had to cost under $4 a bottle and be distributed nationally.

The state side hefes faired admirably in Part I: The Underdog Americans, with Sierra Nevada’s Kellerweis leading the pack. The Bavarian brewmasters have history and tradition on their side though. Can the Americans hold off the German advancement? Find out below…

Tucher Helles Hefeweizen: A distinctive banana aroma fills the air as the beer pours, it smells like a hefe should. Bubblegum and banana flavors are evident throughout and it comes complete with an appropriate slightly sour finish. This medium-full bodied Tucher is authentic and fantastic! Highly recommended and the best Hefeweizen in the test. Grade: A

Erdinger Hefeweizen: Faint clove hits the nose on this medium-bodied wheat ale. It goes down clean and easy, with some sweet malt and light spice, which lingers on to the finish. The Erdinger is drinkable but sadly one-dimensional and disappointing overall. Grade: C

Hofbrau Hefeweizen: Subtle fruity and clove scents rise from the glass on this popular German Hefe. Lemon and banana flavors are noticeable but on the lighter side. A little grainy wheat can be felt on the finish, along with more banana. Not the best of the group but it does taste like a real hefe, albeit a milder version. Grade: B

Franziskaner Hefeweizen: Munich’s Spaten Brewery’s (Inbev) offering is darker than most and attractive in the glass. Not much on the nose though, just some faint banana. Orange and citrus notes hit the palate first — it almost tasted like a Belgian Wit. A hint of banana, clove, and wheat can be felt on the finish. It’s lighter-bodied but complex and would make a great summer beer. Grade: B+

Hacker-Pschorr Hefe Weisse: This orange-amber ale was the darkest of the bunch. A well-known hefe, it smells of light lemon and spice. It’s light and fruity with a pleasant sour yeast, clove, and grainy wheat ending. Drinkable and somewhat interesting but pretty average overall. Grade: B-/C+

Weihenstephaner Hefeweizen: Considered the gold standard Hefeweizen by many. Just a slight wheat aroma was detected. Lemon and citrus flavors are followed by a blast of banana and clove on the finish. Nicely complex and delightfully tasty — this famous hefe is the real deal. Just a hair below the Tucher in the ratings. Grade: A

Overall, although they gave a valiant fight, the American hefeweizens couldn’t quite keep up with the Germans. Delicious choices arrived from both sides of the pond though. 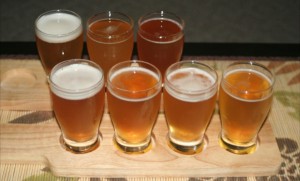 The Tucher Helles Hefeweizen takes home the crown of “El Hefe” although the real winners in this test were us lucky reviewers.

Here’s our list of the top hefeweizens on the shelves: