Part 6 in my series of posts about my recent transition from Tampa, Florida to a new life in California. Read the other five.

Although the word has gotten so overused it’s nauseating, I’ve determined pathological foodie-ness runs in my veins. The first thing I think about upon awakening is to check my garden for growth/bug damage/comfort, and on Saturday mornings I beg my husband to go to the farmer’s market with me. It’s there that I can explore the northern California vegetable and fruit scene in intimate touchy-feely detail. Slowly and methodically, stall by stall, I roll out cash to try the most exotic, odd looking produce. This year, after the local nursery guy convinced me, I planted lemon cucumbers, with utterly no idea of their flavor or size. The internet provided some assistance but without actually tasting this odd-looking, stubble-ladened cuke, it’s still alien.

It was at a recent farmer’s market in July that I sensed these foreign cukes would be on display. I had hints… a friend at work said she’d already harvested one from her garden. I also knew tomatoes should be making their first appearance in the market, so like a kid on Christmas morning, I rushed my husband along — who is, to put it nicely, sluggish, before coffee — in order to get there before 10 a.m. when I was certain all the good vegetables would be gone. But at 10:10, I spied them at one of the stalls — a plate full of sliced lemon cucumbers, free for the sampling. Crisp, lightly flavored, slightly watery but so light on the tongue as a sip of cucumber-scented water at the spa. My mind floated back to all the yellow flowers on my cucumber vine down the street and smiled. In Tampa, I couldn’t grow cucumbers since the voracious bugs would feast on them way before I could. In northern California, however, there aren’t any hungry fire ants, destructive black fly grubs or root eating nematodes to crash my garden party after spending hundreds of dollars to set it up.

And pretty much every morning these days, I pick apples off our tree in the front yard. Still don’t know what kind of apple tree it is but everything tastes better when it’s homegrown.

My blog post on Tampa’s speakeasy, Ciro’s, still reigns on the front page of Google’s search when you seek out information on the place. I was an early adopter of this hip, password-protected, classic cocktail haven since it reeked of cool. I simply couldn’t stay away. So I had to check out Bourbon and Branch, a speakeasy in San Francisco that Yelpers raved about, as well as my friend Noelle who lives in San Francisco. Parking found, reservations secured, password obtained, and entry gained into the place, I found an exotic and traditional cocktail list (recipes like this one, French 75) and at least a hundred bourbon, Scotch and whiskey choices. I can’t drink the strong stuff, so I stuck with the frou-frou drinks made with sparkling wine, ginger and other sweet goodies. Yummy, and worth the $15 per.

(Although this isn’t about life in California, I decided to throw this in here.)

I’ve written a bit about attending the recent Wine Bloggers’ Conference (WBC) in Charlottesville, Virginia but the experience was so much more than just being nominated for an award. It was about the camaraderie and kinship with 325 other people who share a common love of the grape. Sure, I listened to Jancis Robinson talk about the state of wine journalism and hung out with New York Times’ wine columnist Eric Asimov at the pool, but this conference underlined what bloggers are trying to do: educate consumers about a topic so rife with confusion, misinformation and fear that it would be laughable if it wasn’t so innervating. Although the level of wine knowledge suffered a bit — at one tasting in our hotel room where a bunch of us brought wine to share, one guy asked to taste the Brunello di Montepulciano (which doesn’t exist) not the Brunello di 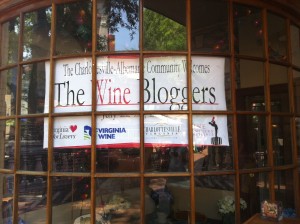 Montalcino. I realize the words are pretty close but, really, if this guy is educating the public, he needs to get it right or the misinformation simply regurgitates like cud.)

My favorite part of the conference wasn’t exploring Virginia’s wines — although many were staggeringly tasty — it was exploring Virginia wines (and others) with so many other wine knowledgeable people, “professionals” like myself, as well as newbies just scratching the surface. And we tasted into the wee hours. Us social media whores, with one tweet, could bring a crowd of people to a room party or spread tantalizing and important news such as warnings about a dog relieving itself in the lobby (really). If this crowd of enthusiastic influencers — and that is what they are — can make that simple act something hilariously funny, just think what their enthusiasm for wine will be able to do once the blogging community gains a little more respect from the traditional media. They already have a following online but we — and yes, I proudly call myself a “blogger” even though the traditional media from whence I came refuses to embrace the challenge — will be a force to be reckoned with as the years progress. I will most certainly return to the WBC12 next year, when it moves back to the West Coast in Portland, an hour north of Willamette Valley in Oregon. At least the weather will be cooler than the humid 100 degrees in Virginia. And maybe the blatant sponsor shilling will be toned down a bit. Bring it.