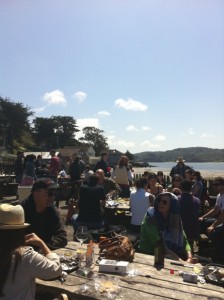 This is Part Four in a series of several posts discussing Taylor’s transition from her life in Florida to working in the wine industry in California. A long strange trip… Read part three and part two.

New House
So we’re all moved into the house in Santa Rosa. A house with rose-printed wallpaper and pink carpet (yes, pink), but we’re adjusting to this ghastly decor slowly. Not every box is unpacked yet every bottle of wine now comfortably sits in the wine fridge. Priorities are important to establish. We’ve also already consumed half of the case of the freakin’ unbelievable Pinot Noir I bought while in Forestville. Dionysus… a small production side project made by Deerfield Ranch Winery’s charming assistant winemaker Cecelia Validivia. We drink it for special occasions, which seemingly occur everyday: our stuff arrived from Tampa without breakage or bribery necessary (we read the horror stories online); we planted the summer garden (herbs, tomatoes, cucumbers, peppers); we had salmon for dinner; we had a particularly productive day. I’ve come to realize that anything can be an excellent excuse to open a good bottle of wine. I highly recommend that strategy.
I’ve never lived in a small town but Santa Rosa’s population of around 150,000 feels like it qualifies. There’s one degree of separation from every citizen, especially in the wine business. The week after our furniture arrived, we were on yet another Home Depot run. At the house on the corner of our street, a guy was outside working on his yard and as I turned the corner, I said, “Funny… that looks like my friend Joel.” I looked again, and again. Then I almost ran over a parked car (I was driving) when I realized it actually was Joel. Joel and his wife Cailyn are my oldest friends in California… they ran The Wine Brats, a now sadly defunct national wine education organization which I ran the Tampa chapter. I’ve known Joel and his wife since 1999. And they lives six doors down from us. Talk about small town and small worlds.

New Friends...and Not Just on Facebook
A few weeks ago, we were invited by my (formerly from Florida) friend Lisa — who also works in the wine business — to Hog Island, an oyster farm about an hour from Santa Rosa where we live. Didn’t take much convincing. A downhome, truly authentic oyster farm on the Pacific Ocean overlooking a harbour and the waves beyond. Definitely not slumming it. But also at this gathering were a slew of wine bloggers whom I’ve “met” on Twitter and Facebook. Social media is kind of a weird thing… you feel like you can get to know people through their experiences, photos and snarky one liners. And you can. Much like if you are reading this blog and haven’t met me. What you read is what you get. And that’s what happened with these guys. People who fully share my esprit and verve for a life of rich with mind-blowing food and wine. People who have overcome obstacles and fear to uproot their realities and move their possessions/families/pets across the country to wallow in the awesome inspiring beauty that is California. It takes balls (and a helping of angst/anxiety) to do this, and I suppose we’re among the elite who have accomplished this goal.

Many of them participated in the Murphy Goode competition like myself (and most advanced further than me, but I’m not holding it against them). We laughed, took copious pictures, opened far too many bottles of great wine, ate gourmet and completely absorbed the California culture that most of us are just now fully digesting. Northern California takes some getting used to since it’s just… fabulous.

New Job
Life at my new winery job has been challenging but also enlightening. Although I knew quite a bit about the wine business, the intricacies are innumerable. It’s quite possibly the only business on the planet which embraces and entertains its competitors. Throwing fully-catered “industry” parties for each other in the hopes that you might direct some of your tasting room visitors to their tasting room. You bring your wine to their industry party and hope someone tries it, likes it and will do the same thing. It’s like a full-on winery circle jerk, but in an eerily friendly way. I’ve been to three of these parties already and it actually works. I’ve directed several people to my neighboring tasting rooms in the Russian River Valley (and Dry Creek) and I get thankful emails. It feels Andy Griffith neighborly.

Next time… the Mendocino wine country weekend trip and pouring at my first massive wine festival in San Francisco.

California Lifestyle: New job, the drought and the miracle of Stitchfix