I can say with certainty that I haven’t walked away from many winemaker interviews wanting to sign up for their wine club. I simply have too much wine sitting in my cellar at home. But the wines from pureCru, made by the ever popular and well-connected Napa Valley winemaker Mitch Cosentino, had that effect on me. They were like crack, but without the side effects.

pureCru is Mitch’s new wine project (aside from remaining the consulting winemaker at Cosentino Winery), making about 3,000 cases per vintage to create a “small, hands-on entity where I could do it all myself again, like I did in the beginning [of Cosentino Winery].” The rather simple yet delicious premise is to grab fruit from his favorite vineyards throughout Napa Valley and northern California to craft small quantities of wine blends. Wines that the average consumer can afford too. How novel from a Napa winery.

From the clean, Chablis-like Chardonnay to the Pure “Coz” Cabernet blend, the wines kept delivering on quality and price. I was, quite frankly, blown away. As regular readers of my rants know, Napa Valley doesn’t generally turn me on. With all the googly-eyed attention this region garners, coupled with offensively high prices, I never saw the point. But Mitch and his 30 years of far-reaching vineyard and consumer insight has led him to a new promised land.

My favorites from the pureCru collection of wines:

pureCru 2010 Chardonnay Napa Valley: Clean with no malolactic fermentation so no butteriness. Yay! Gushing with peaches, tangerines and shockingly high acidity from a Napa Chardonnay. A medium-bodied, crisp pool wine that would also pair with seafood. $25.

Purety 2010 Napa Valley: A Sauvignon Blanc and Semillon blend remiscent of white Bordeaux (what’s that?). The creaminess comes from the wine stewing with its lees during aging, but it’s also herby with plenty of apricot. When I remarked how easily the acidity and fruit came together, Mitch replied, “Flavor and balance are my thing.” $25. 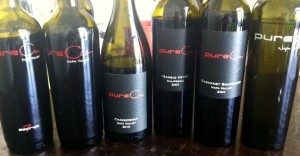 pureCru Sangio Vetta 2007 California: Euro-centric and tastes like Italy’s gutsy Brunello.  A wine currently on the shelves, this 2007 spent 30 months in French and eastern European oak. Concentrated dried fruit, blackberry, plum, baking spices and a swath of leather. Blend of Sangiovese, Cabernet Sauvignon, Cabernet Franc. Stunning. Drinkable alone or would be tasty with anything mushroomy, even a juicy burger. Fruit comes from Napa and Lodi Valleys. A steal at $25.

Pure “Coz” 2007 Napa Valley: Rich, black fruits that slap you upside the head, in a pleasurable way. It’s named after Cosentino himself and, apparently for legal reasons, he couldn’t use “Cos”. There are always work arounds, huh? This wine is forceful in personality yet still manages to subtly seduce the palate with a finish of bright red fruits. After spending 36 months in oak, tannins are present yet even but don’t suck the moisture from your mouth. Drink with some fatty foods to tame the strength — not a hang out kind of wine. A blend of Cabernet Sauvignon (43%), Cabernet Franc (21.5% from his favorite Cab Franc vineyard in Napa, Carpenter), Merlot (21.5%), and Sangiovese (14%). $65.

pureCru Secret 7 Cabernet Sauvignon 2009 Napa Valley: A famous wine writer declared this “a hedonist’s Cabernet Sauvignon” and he nailed it. I went a little further, calling it a “chick’s Cabernet.” A pretty, fluffy Cab, if that’s possible. This very limited production wine is a blend of Clone 7 and Secret Clone. (What’s a clone?) So the story goes, the original bud wood for Howell Mountain’s sought-after Secret Clone vineyard originally came from Bulgaria or Italy — no one will say since it was imported illegally. Get it, “secret”? It’s unlike any other Cabernet I’ve ever tried and I sure want to see the DNA evidence that it’s actually Cabernet Sauvignon. This wine swathes you in red fruit like raspberry and red cherry, has smooth, elegant tannins and a citrus finish. Yes… a citrus finish. Rarely experienced that in a red wine outside of Italy, much less a Cab. Mitch, you got it going on. Nicely done, even at $100.