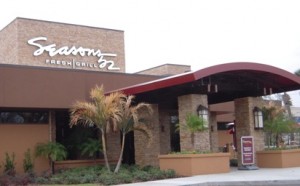 I know a chain restaurant opening shouldn’t generate this much excitement, but I am positively giddy. Seasons 52 has always had one of the most impressive wine lists, guided by the passionate, down-to-earth Master Sommelier George Miliotes. Within the 60 wines by the glass and 40 more by the bottle (both change quarterly), he peppers in unknown yet delicious selections like Torrontes, Bonarda,  and Grüner Veltliner grapes with the comfortable, well-worn likes of chardonnay and cabernet. If I were a wine list, I’d want to be directed by George. He doesn’t fear introducing the wacky stuff and his unbridled fervor for wine simply washes over you. When I visited him at the new location, he had just finished training an enthusiastic, wide-eyed waitstaff. Being educated by a Master Sommelier is no everyday experience for a server in Tampa — his enthusiasm takes our local wine experience to another level. 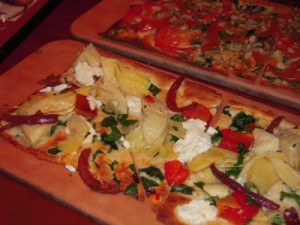 This is the ninth location of Seasons 52, but they’d prefer not to be known as a “chain restaurant.” The concept was born in Orlando in 2003, and up until recently, most of the  locations centered in the South. According to Lisa Lawrence, Director of Marketing for Seasons 52, they have no desire to be a mammoth corporation (being owned by Darden Restaurants,  Red Lobster handles that for them) but three other locations are opening soon, in addition to Tampa’s.

The menu changes seasonally (get it? “Seasons”  52 – weeks in the year), the Tuesday before the Equinox and features local ingredients when possible. The Tampa location will have a locally-caught fish special everyday.

Everything on the menu is under 475 calories, but Lisa squirmed at the thought of being labeled a “diet” restaurant.  The food is far from dietetic and bland. They use simple, flavorful ingredients, serve normal portion sizes, don’t have fryers and the chefs cook many of the entrees over a wood-fired grill. These tricks avoid adding excess calories.   Speaking of eating, the cedar-planked salmon was a favorite of mine, as was the tomato flatbread (not to mention the Mocha Macchiato sweet “mini indulgence” ) They also have vegan, vegetarian, gluten-free and low sodium menus. Most dinner entrees prices range from $12-27, with wines by the glass from $6.25-$15.

I don’t know about you, but I’ll probably be there weekly.

Seeking the unique: Food and wine gifts for all seasons