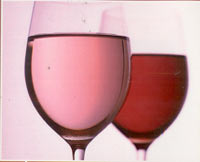 Although I drink dry rosé wines all year long, most people unfortunately lump them into the summer grog category. So by even releasing this blog post towards the end of May, I’m evidently crying uncle to the masses who lump. Dry rosés — and I’m not referring to the tooth-aching, sweet, pink-tinted swill that maligned the elegant reputation of fabulously dry rosés — are simply the best food pairing wines, the most refreshing and most crowd pleasing to those who are man or woman enough to drink them in public.

Granted, the rep of rosé has improved in recent years, being sipped by the geeky enthusiasts in wine bars across the country.  But it’s still a tough sell to the average drinker. I recently hosted a mid-aged couple in the tasting room at the winery where I work, and I pretty much guilted them into trying the dry rosé. It’s kind of an exclusive item — only available for sale at the winery tasting room and through the wine club — so I played up that juicy nugget and the fact that is has no sugar in it. I pulled out all the stops, just to get them to taste it: Fermented dry, and made from Petite Sirah grapes (their favorite, so they stated early on). Weirdly enough, the woman was less inclined to try it than the guy. But finally, either they succombed to my charm or they realized the pink stuff was included in the tasting fee and they had nothing to lose.

They liked it so much, they bought two bottles. Score one for the rosé and another for mustering up the courage to run it across their tongues.

If only an army of rosé fanatics like myself could spread out across the country and descend upon unsuspecting consumers and preach the gospel. The gospel of strawberry, raspberry fruit tinged with bracing acidity and fruity finish. A chilled sipper for everyday (in fact, I’m drinking one right now on a Sunday afternoon) and with any food.

Rosé starts off innocently enough, as red grapes. But instead of ending up in the grape stew destined for red wine, juice for rosé production only sits with its skins and seeds a few hours (sometimes days) to gain some color. You’ll notice that some rosés are darker than others. This indicates the winemaker kept the juice sitting longer, coaxing more tannins and character into the mix to provide more flavorful punch. Then, the skins and seeds are discarded just before fermentation and the standard white wine production process begins.

Great dry rosés come from countless red varieties grown and celebrated all over the globe — Syrah, Malbec, Cabernet, Merlot, Grenache, Pinot Noir, Tempranillo or Cabernet Franc. Although some flavor differences obviously exist, they’re almost universally refreshingly red fruity and fun and dry and drinkable. A rule of thumb when seeking a dry rosé (if you haven’t sampled it first) is if the alcohol is higher than 13% or so (listed on the label), it will taste less sugary. And if it’s from France, you’re good to go anyway — they’re never sweet.

Another little helper: they generally cost less than $20 per bottle.

And might I suggest you peruse the website of your favorite California wine producer and see if they produce a rosé? Most do, but it’s normally a really small production item, so they don’t distirbute it nationally. They will, however, ship it to you. Make everyday a special day by ordering direct from the winery.